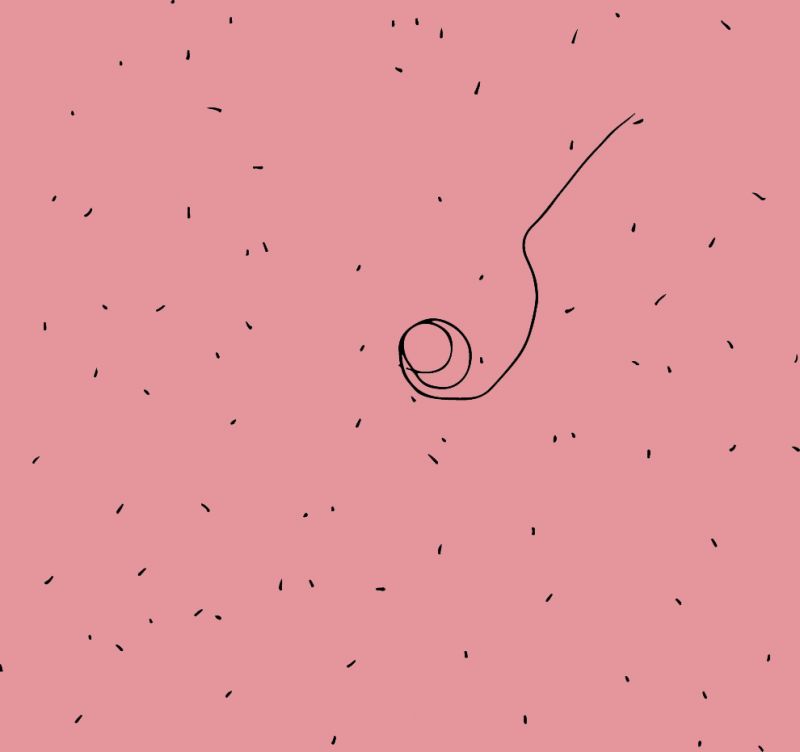 A conceptual weaponization of human hair.

Last episode, we looked at hairwork, jewelry made from hair. This hair jewelry relies on masterfully woven networks of emotional meaning—frankly, it needs this system of meaning in order not to be horrific. It’s very easy for hair to become just an anonymous piece of someone’s body.

This week, a sequel. What happens when we deliberately remove hair from any network of meaning, when hair is anonymous and horrifying, and even when that horror is weaponized?

In 2009, the nation of Serbia sent two artworks to the Venice Bienniale. One was called Warmth.

Warmth is by an artist named Zoran Todorovic. It’s half sculpture, half performance art. In the gallery in Venice, you’d see eight pallets with wheels, each stacked high with black blankets. As you approached, you’d see that the blankets were felt—that is, thick mats of fiber that have been heated and crushed together over and over until they stick.

As you get closer, you’d notice that, at the edges of the blankets and across their surfaces, stray hairs stick out. They’re long and thin. They wave gently. Closer still, you might start to wonder, “Are these blankets made of human hair?”

The answer is yes.

Among the stacks of hair blankets stood little screens displaying sped-up archival footage of hundreds of haircuts, of people sweeping cut hair into trashbags, of those bags traveling to a warehouse and piling up, of heaps and heaps of hair, so much hair you can’t believe it—and all this the hair travels to a woolen mill, where it enters these huge machines as human hair and exits as black sheets of human felt.

These were the blankets you saw stacked around you. And if you wished, you could buy one to take home. Two hundred euros per square meter.

Each meter corresponds to roughly two hundred haircuts, and Todorovic reckons he’s got the hair of a quarter million people. The collection lasted five months taking in two US tons of hair. When I learned about this, I had to know more.

I interviewed Todorovic by email and asked an actor to read his replies.

ZT: I conceived of the work simultaneously as a provocation and as a social experiment related to the mass production and trade of objects made of human bio-waste—or more precisely, from hair. The work poses a hypothetical question: is mass production possible for objects made from the human body, and is the supply/demand relation of such objects possible, and what would such a relation mean?

To carry out this experiment, this provocation, Todorovic actually established and financed a company—a small company, granted, but a real business.

ZT: The collecting, processing, and storing of the hair required a team to do this work on a daily basis. Another team stayed in regular contact with almost four hundred and fifty barbers in five different towns in Serbia. An additional crew of cameramen and film editors recorded the process at various locations.

PG: Did the woolen mill have any reservations about running human hair through their equipment?

ZT: We produced our felt in a factory that already dealt with felt production, so they didn’t mind. However, human hair was a new material for them, and it posed its own unexpected demands. I was fortunate that the technologist who accepted the deal and signed the contract—which was not cheap—entered into all this believing things would happen much more simply, in accordance with their usual production routine, but there were some unpleasant surprises which required inventiveness and innovation.

All of this—the process, the videos of the process, and of course the blankets themselves—all of this was the artwork called Warmth.

The fact that these blankets are the anonymous body parts of so many people suggests some loaded associations. During World War II, the hair of concentration camp victims sometimes made its way to German textile mills, where it became work clothes and boot linings. Nazi scientists and members of the Nazi-allied Croatian Ustasha also experimented with making soap from the fat of murdered prisoners. Todorovic says these associations are deliberate.

ZT: The work itself does not deal with the Holocaust, but in some ways it counts on that trauma to intensify the debate and focus on the problem of contemporary nationalism, which has a similar function to that which fascism once had. Serbia and the entire former Yugoslavia underwent a difficult war period during the 1990s—a war generated by the ethnic and religious politics of identity which were in the background of the politics of extermination during World War II. We should say that, nowadays, this is a dominant political theme throughout the world.

Todorovic shows us the horror and even the violence inherent in the homogenizing forces of nationalism and of the market, of capitalism, a system Todorovic helps us imagine as it watches us, sees us as anonymous, mere bodies feeding it as we groom ourselves endlessly toward a perfect and unattainable normal.

ZT: Warmth demonstrates the normalization that establishes itself on the body—both of the individual and of entire communities. This bio-politics begins in shopping malls, health-food stores, fitness centers, health clubs, plastic surgery centers, beauty parlors, and barbershops.

PG: Did you ever feel uncomfortable touching so much hair?

ZT: No, but I had some kind of allergic reaction to the hair. It creates a dust which irritated my throat, so I was hoarse all the time. This also happened during the exhibition.

PG: Did anyone feel uncomfortable with the idea of you using their hair?

ZT: We received the hair from the barber shops as waste, and we treated it that way. No one who donated would have had occasion to wonder about the meaning of the donation.

Outside of any system of individual meaning, without its identity, the hair in these blankets is only an item of exchange. Todorovic’s work pushes the idea of buying and selling to the strange, distorted extreme that is this orphaned, ownerless, awful hair.

ZT: Every exchange value, including the exchange value of these objects, is just a possibility which must be confirmed through sale. Values are a social product. That is, you can sell something only if a buyer believes it is something she or he needs. Thus, there is a kind of theology of value in which one invests more than in the product itself. This theology carries the real value. I wanted to test the effects of this theology of value, to give it a special attention.

PG: Is any of your hair in there?

PG: And who actually bought the blankets?

ZT: People from the world of art and fashion, who also make their own works out of the blankets. Dresses, for example.

I highly recommend checking out Todorovic’s website, where you can see time-lapse videos of the production and photos of the Warmth blankets, including some blankets on display in people’s homes and hair dresses by several different designers.