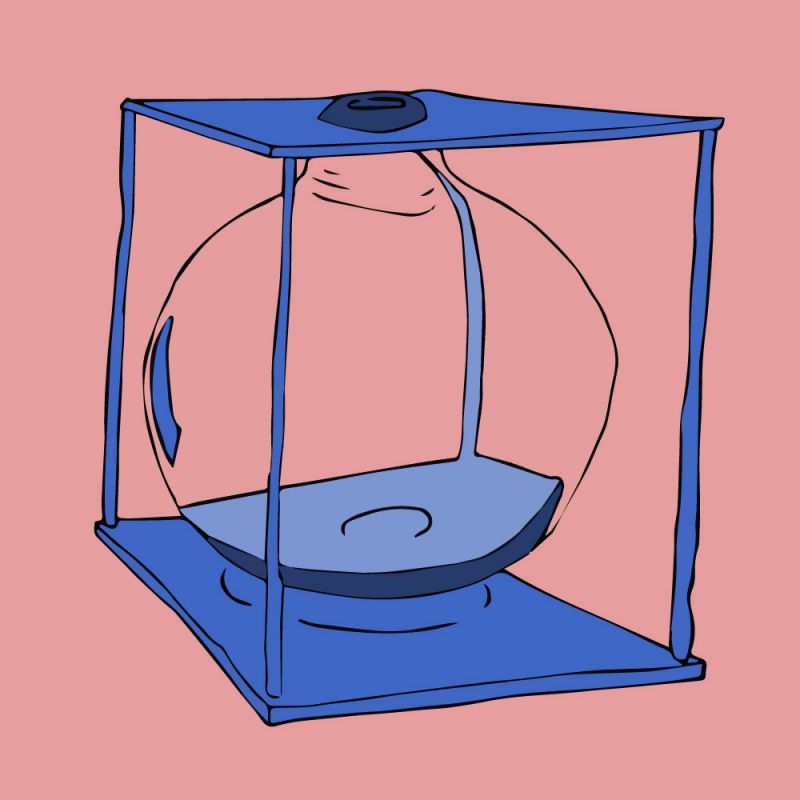 Anxieties about hacked voting technology are nothing new.

To read much more of Ellery Foutch's work on the glass ballot box, check out her article on the subject at Common-Place.

Music featured in this episode:

“in the park” and “incomplete,” by black dots [SoundCloud | Facebook]

When I voted in the Connecticut primary last April, I voted on paper. I stood at a sort of suitcase on stilts and marked a ballot with a black marker. Then I fed my ballot into a green scanner that resembled a paper shredder. The scanner’s LED screen showed a large number, which ticked up by one upon receiving my vote.

On November 8th, election day 2016, I’m going to vote in Virginia, where I now live. This vote will involve a computer. Maybe I’ll push buttons, or maybe I’ll touch a touch screen. Either way, I’ll be given some privacy to consider my choices. Maybe I’ll have a curtain, or maybe a little wall. Unless I decide to tell people, nobody in the United States of America can know who I choose.

It’s usually that choice that gets the focus: the person or people to whom we give our vote. We only talk about the voting mechanism when it doesn’t work.

In the 2000 election, the infamous Palm Beach butterfly ballot became a story of its own. Voters in Palm Beach, Florida, entered their polling places and received a ballot with two columns of names and, between them, one column of punch holes. The butterfly ballot is often compared to a maze; it was hard to say which hole corresponded to which column and which name. Sometimes voters punched out several candidates and, frustrated, simply wrote their vote on the ballot. When we talk about the Florida recounts, the Supreme Court’s Bush v. Gore decision that ended the recounts, and the subsequent reviews that suggest a statewide recount would have given Al Gore Florida and the election, we’re talking about the butterfly ballot—the bodily experience of looking down at that confusing ballot and thinking, “What am I supposed to do with this?”

From time to time, voting objects slide into view, as in San Francisco, 1856.

Ellery Foutch: There were a lot of concerns and fears about the very future of the democratic process.

That’s Ellery Foutch, Assistant Professor of American Studies at Middlebury College. She told me a story that sounds at first not too different from the present day, with all the talk of rigged elections and hacking.

EF: People were very concerned about the sanctity of elections. You get a lot of fulminating in editorials and articles about the purity of the electoral process.

In May of 1856, James King, a newspaper editor, accused City Supervisor James P. Casey of corruption. For years, the people of San Francisco had suspected widespread corruption. Casey, the politician, had finally been called out by King. On Wednesday, May 14, Casey confronted his accuser in the street. According to a newspaper, Casey asked King, “Are you armed?”

“King made no reply but looked at Casey. Casey threw off his cloak and presented a large navy revolver saying—‘Draw and defend yourself,’ at the same time taking deliberate aim and covering his victim with a well directed shot.”

The politician had shot and killed the newspaperman in broad daylight. The community was outraged. A vigilante group seized Casey from jail and hung him a week later.

That summer, vigilante investigators proved King right. They discovered what they called a “stuffer’s ballot box.” Beyond San Francisco, newspapers laid out the box for their readers, fearing their own districts might be using it. Frank Leslie’s Illustrated Newspaper declared:

“On looking at the ballot box, few would suspect the contrivances about it; but on further examination it was found that it had a false bottom and a false side, under and behind which were packed quantities of spurious votes all ready for an election.”

All across the country, voters had come to suspect that corruption and bribery had taken root, unseen. Now they could see it.

EF: Here was a concrete manifestation of that sort of corruption and bribery.

The stuffer’s ballot box made tangible a prevailing fear about the perils of a large democracy: how could you know the election wasn’t rigged? How could you see it? In New York, the State Assembly’s Committee on Grievances lamented that the ballot box “still fails to be a true reflection of the will of the people. … Underlying as does the ballot the beautiful superstructure of Republican institutions, it behooves all interested in their perpetuity … to guard with especial vigilance its purity.”

This beautiful democratic superstructure would require a beautiful solution. Days after the Frank Leslie’s article, or so the story went, a man named Samuel C. Jollie appeared at the New York City mayor’s office with a better ballot box.

EF: This great new invention that he’s come up with, which we kind of think of as the physical opposite of that wooden ballot box with its false sides. It's this amazing transparent glass globe that's held aloft between this iron metal framework of columns holding almost a mystical crystal ball that's holding this promise for a transparent and straightforward election.

We don’t know much about Jollie, the man who supposedly invented the glass box. According to Ellery he may have been a publisher of sheet music. But his design was simple and elegant. The glass globe had a metal lid with a hole smaller than a dime.

EF: You'd have to roll up your ballot really tight, almost like a pencil or a cigarette, to get it through the opening, and then it would kind of unfurl in the globe.

As the votes piled up, every voter could see, with perfect clarity, the piecemeal work of democracy.

EF: At the same time it also seemed to so encapsulate the idea of transparency in voting: a combination of the materials and the form itself.

The distinctive globe shape appears often in political cartoons of the time, serving as a symbol of pure democracy. Ellery showed me a political cartoon in which Uncle Sam and Miss Columbia, two allegorical representations of the United States, stand in a filthy room. Graffiti’s scrawled across the walls. There’s rubble on the floor.

EF: They've got bars of what's labeled “Reform Soap,” and they're looking around in this kind of disgusted way. They're really trying to take over and make right this room that has just become so sullied by corruption. And in this instance, Uncle Sam is shown rolling up his sleeves and wearing an apron, and very optimistically cleaning the glass ballot box.

EF: I think that in many ways, the ballot box became this object onto which a lot of people's fears and concerns and hopes were projected.

It’s a nice image, but it proved to be little more than that: an image. Within the year, a newspaper editorial had accused the New York City mayor of a murky plot. Mr. Jollie was a frontman, it seemed. The mayor’s people had had the boxes made for cheap and then bought them from themselves, using the city’s money, at three times their production cost.

EF: So even this thing itself that was supposed to be kind of this hopeful emblem of democracy and transparency was now in the midst of this swirl of charges of corruption and nepotism.

That’s the problem with transparency. Claims of total clarity can hide more than solid wood, through misdirection.

The boxes fell out of use—or out of political use, at least. Some people began using them as fish tanks.

EF: I also came across a clipping from a California collector who talked about his mother using it to pickle peaches.

Still, the image lived on for decades in political cartoons. The symbolic object outlived the physical globe. One could immediately recognize it as an ideal of the democratic process, perhaps never to be attained, but imaginable all the same.

Transparency remains a fertile aspirational metaphor. After the reunification of Germany, the dome of the Reichstag in Berlin was rebuilt in glass rather than stone, so that visitors can stand on the roof and look down on government proceedings that are literally transparent.

Today, Ellery says, our voting objects bear out a different vision of democracy. In the early twentieth century we began to prize the idea of voting in solitude.

EF: People have become much more interested in the privacy, the secrecy, of the ballot. Of that as a sacred activity that's kind of between you and your conscience, that no one else should know who you're voting for.

This, in turn, came from anxieties about politicians paying voters at the polling place—or threatening them.

EF: If only you and your conscience know who you voted for, there's no way of then securing a favor.

Behind the curtain, inside a booth, voting is supposed to become a communion between the individual and the ideal of democracy. It’s a kind of political Lutheranism. The institutions through which democracy exists in the world are supposed to fall away. It’s supposed to feel like that, at least. It’s just you, the ballot, and your marker. I’ll be alone at that touch screen, touching my candidate’s name.