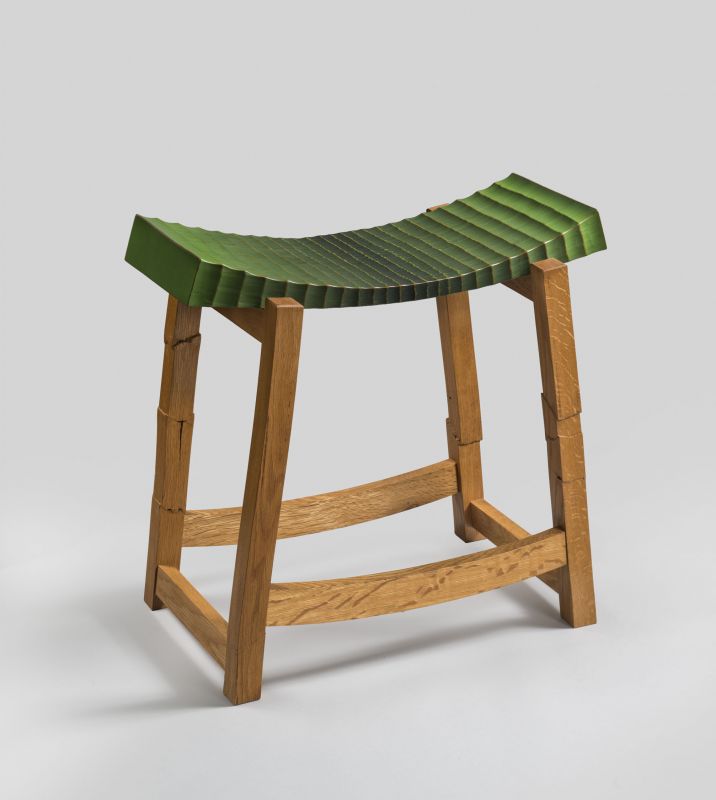 Heavy is small stool that initially appears to be rather conventional. As you get closer, the legs reveal unexpected profiles that suggest they have been broken. The way they were brought to this state is rather unusual—after being cut to shape they were crushed in giant hydraulic presses at the Materials Testing Lab at the National Forest Products Laboratory (NFPL) on the University of Wisconsin-Madison campus.

The backstory to this project centers on the NFPL in Madison. Staff there invited the woodworking students and the woodworking faculty at the University of Wisconsin-Madison, where I teach, to make a piece for a group show with the specific stipulation that each object utilize research from the lab. I previously had been on many tours of the lab and always loved seeing what they were doing with stress testing various types of wood to determine relative sheer strength. Apparently this kind of experimentation goes all the way back to the days of rural electrification when the lab was charged with testing telephone poles that would sometimes break in long domino-like sequences when one pole went down and started a chain reaction. The first time I went through NFPL the scientists still had the huge machine designed decades earlier to determine the breaking point of telephone poles.

For Heavy, I brought in identically dimensioned pieces of oak, pine, maple and walnut to be crushed.  The pieces were set up on a hydraulic press at NFPL with about an inch rising above a steel tube that supported the sticks and prevented them from just buckling out to the side.  The top part of the press would slowly lower and push the protruding wood downward in compression.  The pounds of pressure were visible on a monitor and would build higher and higher until the wood fibers failed.  Each test leg was subjected to immense compression—My memory is that the force was as high as 18,000-20,000 lbs. What initially looked to be breaks or splits in fact turned out to be kinks or slip-faults where the wood fibers have given way or distorted but largely did not shear. Each leg ended up approximately three quarters of an inch shorter but amazingly still showed strength in compression up to 6,000-8,000 lbs., strong enough to hold up a small elephant.

Both literally and as a kind of visual metaphor, I find this “crush zone” beautiful for what it shows about wood’s structural abilities and also about the larger idea of resilience. From a strictly scientific and manufacturing standpoint, this kind of immense strength under compression—where the machine is essentially making a piece of lumber shorter—is a situation in which wood excels. As an artist, however, I discovered something else as well: when it does fail under immense compression the resulting scar or shear is often stunningly beautiful. This revelation inspired Heavy.  Its curved seat profile is meant to be a simple visual pun suggesting that a massive “sitter” had applied a great weight to the seat of the stool. The stool itself is not heavy at all, but its very essence is all about heaviness.

Once I had a good inventory of crushed parts, I began in earnest to design Heavy. Although all the legs had reacted in some way to the tests at NFPL they really didn’t fail and remained plenty strong enough to support the kind of stresses that humans put on a sitting structure.  When we sit on a piece of furniture, we just don’t generate tens of thousands of pounds of pressure no matter how much dessert we ate the night before.  Perhaps what makes the details visually compelling is that we are getting to see a material pushed beyond its limits and we can see how that demanding punishment has generated quite beautiful visual artifacts.

Tom Loeser is currently Chair of the University of Wisconsin-Madison Department of Art, and has been head of the wood/furniture area at UW-Madison since 1991.

Explore the online exhibit Tom Loeser: It Could Have Been Kindling to virtually experience the 2014-2015 show that the Chipstone Foundation held in conjunction with the Museum of Wisconsin Art.