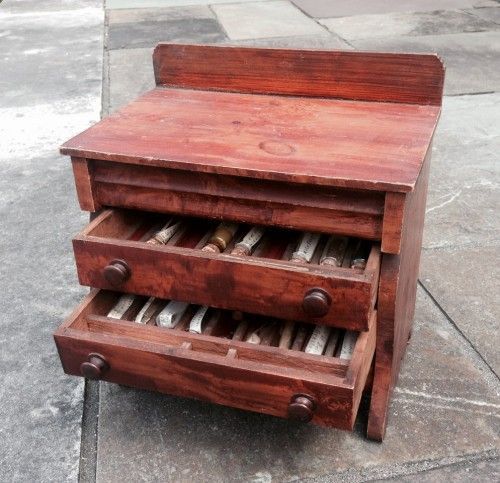 The Chipstone Foundation in Milwaukee, Wisconsin, an organization devoted to innovative museum practice as well as to the study of historic American furniture, American and British ceramics, and American prints, doesn’t always collect what one might expect. Recently we acquired three peas said to have been served at Andersonville Prison, a swatch from bareknuckle boxer Joe Goss’s colors, splinters from the wreck of an ill-fated arctic expedition, and a feather collected from a Russian state bed. Each of these relics is sealed in its own glass tube, similar to the glass vials carried by nineteenth-century surgeons. They were arranged in a small, toy-sized chest of drawers. At one point, a careful collector retrofitted the small drawers with dividers to hold tight its precious contents. Along with twenty-four other vials, many of which date to the time of the 1876 Centennial Exposition in Philadelphia, this small chest of drawers is its own self-contained collection, its own kind of museum in a box.

Chipstone is technically an art museum, housing some of the finest examples of American and British decorative arts anywhere in the world. If we were still bound by historic notions of what makes an art museum an art museum, we would not have acquired this small self-contained collection. It is not a work of art (though the miniature chest of drawers is clearly in the style of the 1830s), it is not by a known artist (though we continue to investigate the identity of the maker and collector), and its interest is not primarily aesthetic.

Our miniature museum crosses the categorical boundaries that have typically defined modern museums. As historian Steven Conn has described, in the late nineteenth century, museum makers like George Brown Goode at the Smithsonian became increasingly interested in defining and categorizing the items that belonged in various museum collections. “Art” was not “Anthropology” nor was it “History” or “Natural History.” The definition of these intellectual boundaries — separating one kind of museum and one kind of collection from another — paralleled what was happening in universities as a variety of academic departments emerged with the rise of formal graduate training. Over time, these categories became further codified and ossified. Material things that seemed to cross categories usually had to find a home in just one museum, and typically were studied from one disciplinary perspective.

Our miniature collection may seem to be primarily historical. But its contents also have biological or natural history interest (What did prisoners eat at Andersonville? Why was the Old Elm on the Boston Common so old?), address economic or commercial questions (How did this “Holy Cotton” from Moscow get to New England, where the collection was created?) and certainly have anthropological implications (Why would someone collect these items? What can this reveal about their culture?). Why shouldn’t we see a small chest of drawers like this in an anthropology museum, with documents of other world cultures? Or, in an art museum like ours?

This modest grouping of unusual things fits within a long intellectual history of museum making and for that reason fits within our museum. Its strange list of contents produces the feelings of wonder and curiosity inspired by early wunderkammern. As a small cabinet of curiosities, it can help us engage with the history of collecting. Can this collection offer a portal into the mindset of a collector, who used a toy and an old medical kit to create a material record of his (or her) mental world? What is the worldview of a person interested in the ruins of a burned convent in Boston, Civil War balloons, battle flags, and sand from the Lake of Galilee?

The deeper question this miniature museum allows us to investigate is about the value of interdisciplinary training and thinking. Any material thing is best understood from multiple perspectives, using the tools of diverse disciplines and lessons learned in many different kinds of museums. For now, our challenge is to help our visitors find a way to open these drawers to investigate the contents of these glass vials, to transport them to a lost world far more complex than any one museum can adequately capture.