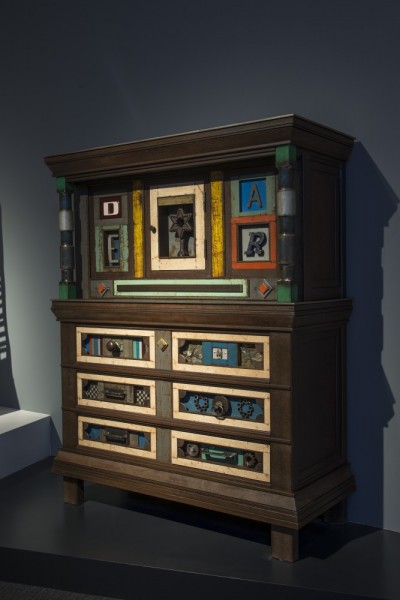 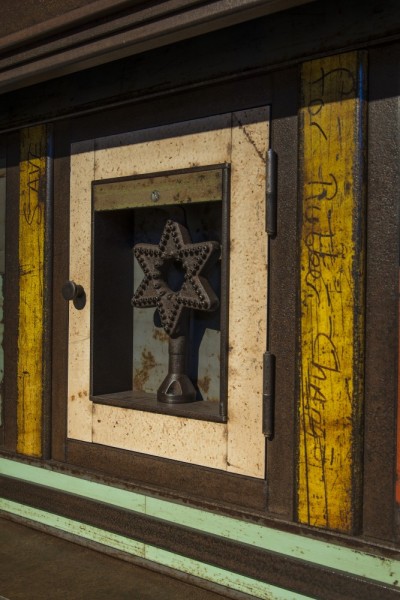 In her groundbreaking material culture publication The Age of Homespun: Objects and Stories in the Creation of an American Myth (Vintage, 2002), Dr. Laurel Thatcher Ulrich sheds new light on the remarkable Hannah Barnard court cupboard made in Hadley, Massachusetts, (Collections of The Henry Ford).[1]  As Ulrich explains, this visually alluring piece of early American furniture is a complex cultural survivor, “not only a marker of status but an assertion of life and order” that reveals to us aspects of female history and ownership rarely spoken of in conventional histories of American decorative arts. It is an explicitly gendered container that would have held the family silver and textiles under its owner’s watch. It was also was purposefully covered with brightly colored ornamental flowers and vines as a reminder of the culturally prescribed female attributes of fertility and fecundity.

The cupboard likely was given to Hannah to commemorate her marriage to John Marsh in 1715, yet it boldly records for posterity her pre-marital identity—an unusual exception to the rule in what otherwise was a rigidly patriarchal society. Sadly Hannah did not have much time on earth to enjoy the cupboard. She died in 1716 leaving behind an infant daughter Abigail who then would have inherited this and other “movables” from her mother’s estate. Later, Abigail passed it on to her own daughter, Hannah Barnard Hastings. This line was intentional, indeed almost unavoidable. As Ulrich notes, “the cupboard helped preserve the name, but the name also transformed the cupboard,” by ensuring that it almost certainly would remain in the family and keep Hannah’s memory intact

In 2015 the contemporary furniture maker Jim Rose from Wisconsin decided to draw his inspiration from Hannah’s cupboard and created a version in steel to honor of his daughter, Delilah Emily Alana Rose (hence the “D E A R” initials across the front façade). As is common to his practice, Rose repurposed materials from scrap yards to create contemporary steel object that unmistakably drew upon traditional wood cabinet making practices. The faded and in some places rusted steel parts on Delilah’s cupboard allude to the patinated surfaces typically associated with the Barnard example and other painted early American furniture forms. As with the original, Rose’s new version creates a complicated contemporary narrative that both celebrates and respects the original.

Delilah’s initials literally are recorded in steel on this nearly 1000-pound cupboard, but so too are other aspects of her being. As with the Hannah Barnard cupboard, allusions to hope and growth abound. For example, Rose saw the star-like gas stove element in the center as a symbol of transformation or change (heat). The same can be said of the diamonds, a visual reminder of the precious stones that themselves are the product of geological transformation. On the drawer facades, the rainbow-colored strip speaks of hope and luck while the doorknob opens the door of opportunity. The handles below, taken from ladder rungs, represent the idea of climbing, excelling or exploration to Rose. The black squares are like a game board and remind the viewer of making informed choices, while the keys and handle are about unlocking potential and finding the key to happiness and safety. A truck door handle brings to mind the idea of travel and taking journeys in life, and are linked to the gears that remind us of knowledge that can be gained along the way. Similarly, the rings and hitch-pin are markers of domesticity and of the partnerships that are likely to occur in life. In short, as with Hannah’s cupboard made three centuries ago Delilah’s totemic cupboard speaks of aspiration, desire, memory, and ultimately of love.

[1] For more on Ulrich’s reading of the cupboard, also see “Furniture as Social History: Gender, Property, and Memory in the Decorative Arts” in American Furniture, 1995 (Chipstone/UPNE, 1995).

Jim Rose’s “DEAR Cupboard and Chest of Drawers” is currently on in the NEO Gallery in the Constance and Dudley Godfrey American Art Wing of the Milwaukee Art Museum.